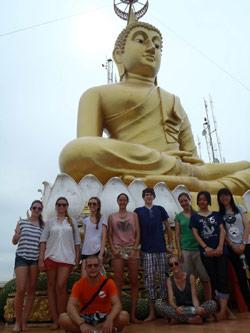 What a busy summer we had here on the conservation project in Thailand! We welcomed over 40 volunteers to join us throughout July and August, including the 2 Week Special volunteers. With so many people, we were able to do a lot of data collection, surveys and environmental work. Everyone benefitted from so many willing hands, all coming together to make a difference in this part of the world.

Over the summer season, we completed the following work:

Despite the onset of monsoon season, we successfully completed Reef Check Surveys on 25 sites over the summer. As the seas picked up, we did the majority of our research dives around the local islands.

We had some days of really great visibility while other days were less than 1m! The local sites did give us a few surprises though, including one day we saw a group of black tip reef sharks. It is really uncommon to see sharks around these islands.

We also saw a tiny blue spotted ray, which must have only recently been born – a real treat. Also lines of squid were spotted, hanging out midwater, giving us a multi couloured light show.

Sadly, we monitored rather a lot of algae growth over the reef, as well as a lot of dead hard corals.

We also visited 25 sites to collect marine debris from above and below the water. As usual, the majority of our finds were fishing related. We brought up 100s of metres of discarded fishing line and over 50 fishing lures. We had reports of large fishing nets snagged on the coral reef, so spent 5 dives removing these. We also freed a number of parrot fish, sting ray and bat fish from abandoned fishing traps.

During monsoon season, we do come across a lot more discarded and lost items as the high seas wash over the fishing boats, causing lose items to go overboard. Also nets and lines get caught up and are cut free by the fishermen, as the boats get dangerously close to the islands and reefs. 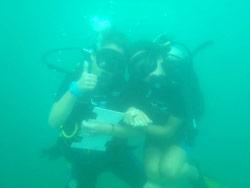 In addition, we brought up several mask and snorkel sets, which we believe a tourist day trip boat must have dropped overboard by accident.

We also found some real treasure – a Go Pro Video camera, original rayban sunglasses and a beautiful gemstone bracelet – finders keepers being the rule of the ocean, we had a few very happy people!

We only recorded seeing two turtles over the summer, one green and one hawksbill. This was disappointing, but again these beautiful critters are not so common around the local islands where we did most of our diving in the summer. 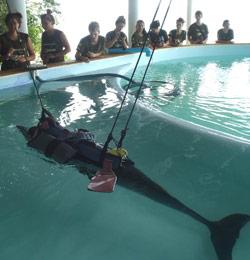 Also, the Scientists at the Phuket Marine Biological Centre called us in to help when a sick dolphin was washed up on a local beach. Six of our amazingly selfless volunteers gave up their free time to work with the dolphin helping to care for it and give it medication throughout the night. Unfortunately after a week of trying, the dolphin was unable to find the strength to fight and passed away peacefully under the care of the centre’s staff.

What a muddy time we had of it this summer! The rains made working in the jungle and forests harder work, but it also has helped our newly planted trees thrive. 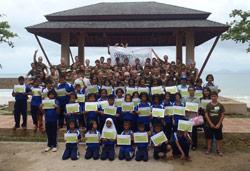 Our nature corridor through the rubber tree plantation is finally finished and the scientists monitoring the species there have reported seeing four different types of the Pitta’s Guerney bird, previously thought to be close to extinction.

We also spotted a very rare flying lemur (also known as flying fox) so these months of back breaking work is already paying off as we see wildlife returning to the forest!

In addition to the outside work, we are keeping our environmental education programme running in the local schools. We returned to Khlong Thom School to rebuild their tree nursery and finish building the recycle station.

With so many volunteers to help us, we managed to collect over two tonnes of trash over the summer months.

At this time of the year, the tides come high onto the beaches, bringing lots of debris with it, and so we had lots of trash to pick up!

On our own beach in Ao Nammao, a number of very large truck tyres were uncovered as the sea beat the sands away. The volunteers were very resourceful in removing the tyres, using brute strength, bicycles, trolleys and we even had a motorbike come help pull some out!

But it wasn’t just the heavy stuff that added to our bounty of trash. We noticed an increase in food wrappers and household garbage. We believe this resulted from the swelling of inland rivers due to the extra rainfall, which bring to the ocean and beaches all the trash that has been dumped in the villages and forests. 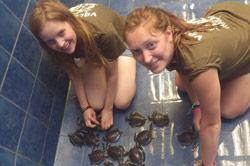 We had more volunteers than turtle tanks to clean over the summer, so the volunteers split into two groups and did split shifts working with the turtles. We did the usual cleaning of tanks, helped the vets give medication and we also cleaned the beach in front of the Turtle Rehabilitation Centre.

We followed our work with an educational tour of the aquarium, where our volunteers were tested on their fish identification knowledge! 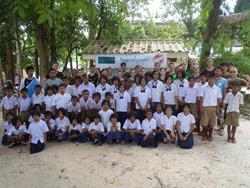 In July we arranged a community beach clean-up and education day. We set up in Khlong Muang School, where the school children, teachers, villagers and even the Thailand National Guard listened to a very informative environmental presentation designed and presented by our volunteers. Simply having the support of the military gave us all such a sense of pride in the work we do, and showed the children how seriously they need to take these issues.

We then all cleaned the beach in Khlong Muang together, collecting over half a tonne of trash from this picturesque beach.

In August, we were invited by two schools to join them. We began our day with the Khlong Muang School’s sports day. Volunteers took on teachers and children in football and chairball and we all had a really fun and enjoyable day. 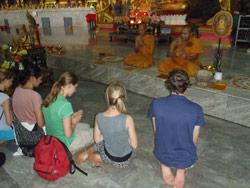 Those that didn’t play sport, joined in the staff cheerleaders as we banged drums and shouted our support to the volunteer teams!

After lunch at the school, we travelled to another school in the area where we were delighted to see a display of traditional dance, singing and community tree planting.

As always, both those days were followed by a wonderful dinner together, where staff and volunteers from all over Thailand mingle and share stories.

All that is left to say is a massive ‘Thank You’ to all the volunteers past and present for your level of commitment to our projects and making things happen!

‘Til next time….keep saving the planet!