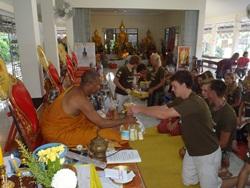 Friday 13th is often seen as an unlucky day, but not this April because this was the day that the Thai New Year (Songkran) fell upon. The Thai people celebrate Songkran by throwing water over everyone they see! This was not to be missed and so we all got involved arming ourselves with water guns, super soakers and buckets we hit the streets of Ao Nang joining in the biggest water fight in the world!

In addition to all the fun we have had over the month, the volunteers have been working hard on our conservation projects and surveys, so here's the news from April.....

We carried out a total of 7 Reef Check surveys during this month at 7 separate sites. The weather conditions were varied as was visibility and the volunteers dive skills were tested as they carried out some surveys in very low visibility and strong currents.

Our first two surveys of the month we were disappointed to count very few indicator species present. In fact, at Maya Nui, the numbers of fish in general was extremely low.

The rest of the month faired better as we counted a high diversity and numbers of invertebrates, with plenty of plate corals, anemones and long spine sea urchins counted. In fact, during our last survey of the month at Koh Talu, we counted 250 urchins which is great for the health of the reef, as these urchins feed on the algae which can grow out of control in the warm waters of the Andaman Sea and suffocate the corals.

Three of our volunteers, Michael, Alice and Lockie, completed all of their Reef Check Survey Training this month and conducted their first official survey out on the reefs :) 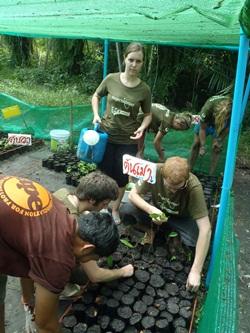 We had a very successful ocean clean up this month, clearing trash from four dive and snorkel spots. As usual we found a lot of food wrappers, bottles, fishing gear and foam debris.

On 18 April we returned to Koh Yawabon to remove a large fishing trap which we had discovered last month, but needed to leave there as a cuttle fish had laid its eggs on it. The eggs had hatched and so we took lift bags and brought the trap to the surface for safe disposal.

At Koh Talu, we did find a bicycle inner tube, but on closer inspection we found there were small colonies of coral and sponge growth so we decided to leave it and allow the ocean to make it into an artificial reef and home!

Due to the stronger winds this month, we did not find so much surface trash, but this simply means that it will end up somewhere else...hopefully on one of the beaches we regularly clean so that we can take it out of the environment and properly dispose of it. 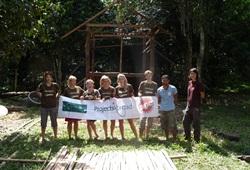 We got in 5 days of work with APE this month which was great as we were able to make good progress with our preparations for rainy season when the tree planting work will begin!

A lot of the month's work involved helping to build the APE Headquarters and Learning Centre out of natural materials, which we helped to source locally. It was a great learning experience to work with bamboo and build structures using this widely obtainable material.

During the third week, the reforestation team came to us to work on our tree nursery and plant more seeds in readiness for planting during the wet season.

We also visited Khlong Thom School where we are running an environmental programme with the school. It is currently school holiday in Thailand and so we went over to the school and worked on the tree nursery we have built there. The work involved caring for the saplings, weeding, watering and checking on the plants health and growth. 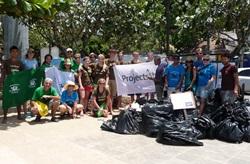 In April we joined forces with Loving Andaman Sea, a local initiative set up by a local business owner who cares about the affect the trash is having on the beautiful beaches around Ao Nang. We worked as a team of over 30 and cleaned over 250kg of trash from the beach. It was a great feeling to work with the local people on a joint mission!

We returned to Ao Nang beach a couple of weeks later to compare and we were really surprised that we collected over 200kg of trash again!

It has taught us how important our work is and the need to continue with our anti-trash campaign in this area.

We sent all our recorded data to the scientists in Phuket and they are currently using this data to put together strategies to combat this issue.

This month were able to report to the Phuket Marine Biological Centre that we spotted 1 green turtle and 9 hawksbill turtle to be included in their endangered species monitoring survey.

Our monthly visit to the Turtle Rehabilitation Centre was an awesome experience, as always! We had enough volunteers to work with both the injured and rehabilitating turtles, as well as with the hatchlings and the Oliver Ridley pairs in the breeding area. We drained the holding pools, then scrubbed out the algae and also gave the older turtles a scrub down which they seemed to enjoy!

At the vet station they had a whole skeleton from a small whale out on the ground drying. They told us that it came from a stranded whale on a nearby island. 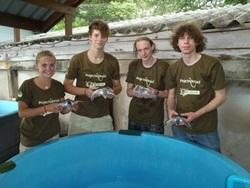 Our Community Outreach this month was totally fun as we celebrated the Thai New Year 'Thai Style!'

We began our day by visiting a local Buddhist Temple and making offerings to the monks that live there. We were warmly welcomed and asked to sit before the monk who said prayers for us and blessed us. Sven, one of our volunteers, was asked to chant prayers with the monk, we were then blessed with holy water. The monk asked to have his photo taken with us too! I guess its not often that 25 foreigners go into the temple at one time! The monks allowed us to walk around the temple where they have a statute of laying Buddha that is 15m long! They also recently excavated shell fossils dating back thousands of years from when the sea level was higher (Linnea, our Marine Biologist, was totally fascinated by this!!)

We returned to the Dawn of Happiness for a champagne brunch, where Vi, our Social Manger, gave out water pistols to everyone, then we headed into Ao Nang where the mayhem began! Joining the locals in the streets, we participated in the crazy water fight until the early hours of the next morning! 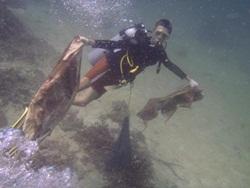 We welcomed the Global Gap Year volunteers to Thailand as their fifth and final destination! They were all very happy when they saw our location and realised that they would be spending their last month in this little piece of paradise.

The dive staff and some volunteers gave up their weekend free time to join with Kontiki Dive Shop to go to a dive site which had been covered by a massive fishing net. This net was totally wrapped around the pinnacle and it took two dives and 14 divers to cut just a small portion of it away. There are plans to go back to remove the rest as soon as possible. This was an emotional experience to see the devastating effect that lost fishing gear has upon the reef, breaking off corals, sponges and other invertebrates, suffocating the reef, trapping fish and so on. These experiences certainly solidify the importance of the work that we do here.

Sven, one of our long term volunteers, is using his time here to complete a dissertation for his university studies on responsible waste issues. He gave us a presentation of the work he has done so far and proposed plans to create a system for environmentally friendly waste disposal, including creating a recycling processing station in Khlong Thom village, where we do our reforestation work. If Sven gets the funding, he will be back later in the year to start implementing his systems...so watch this space!

The volunteers went on a trek to the highest point in Krabi and got some spectacular photos which you can see on Projects Abroad Thailand - The Official Group Facebook page.

So as we wave goodbye to April, I would like to thank the volunteers and staff here for giving so much to make sure this project continues to make a difference.