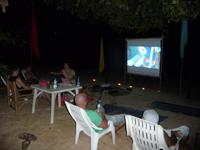 On 1st October we officially moved into our new premises, an eco-resort named the Dawn of Happiness. Set amongst a tropical garden, the conservation team and volunteers have set up home in simple bamboo bungalows on the beach at Ao Nammao.

It has been a very rainy month here in Thailand, most of you will have seen the news reports about the flooding in Bangkok. Luckily, Southern Thailand was not affected by the floods and our projects continued without disruption.

Here is a summary of what the volunteers have been doing... 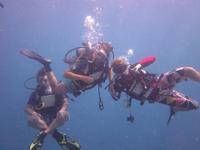 The volunteers are absolutely loving this survey! Linnea, our Marine Biologist, has been training everyone to identify species of fish and corals, then when the volunteers are ready, they get to participate to counting key species and collect vital data which they then enter into the Reef Check database.

Every dive, the volunteers have been coming back really pleased that they managed to identify even more species, often finding some rare or unusual critters, whilst learning new marine research techniques and refining their buoyancy skills.

We conducted 13 separate surveys during October at different sites both locally and around Phi Phi.

Conditions were varied during the month from rain storms, 2 metre waves with 1 metre visibility, to bright blue sunny skies, pond like seas and 20 metres visibility!

We found that blue-green chromis were the dominating fish species of the month, with over 4000 being counted at Koh See alone on 12th October!

On 19th October we conducted our first survey of Koh Bida Nai and found a variety of key indicator species, including an abundance of lunar wrasse.

It was sad to survey that at some sites the hard coral cover is between 0 -25% only, with the soft and leathery corals seeming to do a bit better.

In addition to the species we monitor, the divers got to see turtles, sharks, sea snakes and cuttlefish! 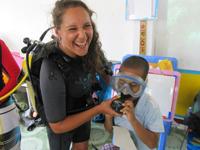 During the month of October we cleaned the reefs and ocean surface at 10 different dive sites. Collecting a total of 12.6kg of trash.

We were happy to report that on two of the sites we surveyed, there was no trash to collect at all!

Around the middle of the month, we encountered a lot of debris floating on the surface, mainly polystyrene building debris. In fact, on the reefs we brought up a lot of building materials such as PVC piping and guttering so it seems that someone dumped their unwanted building materials in the ocean rather than disposing of it responsibly on land.

We found a very large fish trap that was too heavy to bring to the surface, so we removed the netting and left the framework. We also left two tyres from different sites as damsel fish had made it their home already, some sponges had attached and there were signs of anemone too!

Whilst collecting debris from the reef at Maya Nui, we were joined by 10 black tip reef sharks that swam around us for a little while!

Our first mission this month was to move the mangrove nursery to our new premises. The volunteers rebuilt the nursery and set up the areas for the different species of mangroves that we grow.

Now that we had the nursery set up, we went out on two seed collection missions over the month. We collected a total of 531 seeds, which we planted in our nursery. Already they are growing and will be ready for planting by next month. 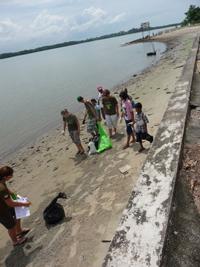 We returned to our Talan site to check on our saplings and to plant some more. We were delighted to see that the home grown saplings we had planted the previous week had survived the rains.

Our tree planting efforts this month saw us plant a total of 288 saplings, of three different varieties in two different sites.

Whilst out planting we saw a sea eagle and king fisher. This shows that our reforestation work is helping to provide a habitat for these beautiful birds, as well other animals and marine life. It always feels so great to see first hand the impact our hard work has on the local wildlife.

Our data collection surveys had particular importance over the past 2 months as we were involved in providing specific data for the Ocean Conservancy's 2011 Annual Report. This report is the world's only item by item, location by location snapshot of marine debris. By understanding what is out there, the world's environmentalists and governments can work together on finding solutions.

The first beach we cleaned was outside our new premises on Ao Nammao Beach. We wanted to let the locals know 'we are here!' and to show them what we do and the purpose of our project.

500 metres North of Ao Nammao beach is a shrimp farm and 500 metres south is a large hotel, so we were interested to see what we would find. We collected an astonishing 341kg of trash in just a couple of hours! We cleaned this beach again on 28th October, and we were delighted to collect only 33kg this time.

Now that we are based here, Ao Nammao will soon be the cleanest beach in the whole of Krabi!

The most interesting finds this month were 39 cigarette lighters and many shoes collected from Klong Muang beach!

We collected a total of 824.9kg of trash from beaches in October, with only 28.5kg being recyclable.

We are delighted that the Fisheries Department has received extra funding from the Government which has enabled them to employ full time staff. This does mean however, that our volunteers are no longer needed to help out. 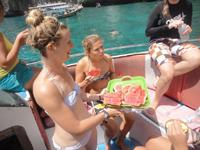 So on 10th October we were invited to join a guided tour of the fisheries. We had a look at a variety of butterfly fish, surgeon fish and trigger fish and learned how to identify them. Some of the volunteers were invited to pet a stingray at the shoreline and we all watched as the fish were fed by the staff.

We have thoroughly enjoyed working with the fisheries department as a vital local resource in providing information on recreational and commercial fishing, aquaculture, habitat and species protection and repopulation.

The Thailand Teaching Project invited the Conservation Project volunteers to spend a day with the 50 children taking part in the 'Yes We Can' English Camp they organise each year.

Of course we jumped at the chance to educate yet another 50 youngsters on the important role they play in conserving their natural resources for the future.

As always, the volunteers did me proud! We started the day with introductions, then two of the volunteers, together with Punch, our local field co-ordinator, presented a bilingual slide show which took the children on a visual journey into the importance of adopting environmentally friendly practices.

We followed this with a trash clean up along the banks of the stunning Krabi River, where the children live and from which most of their parents make their living. We ate a picnic lunch in Thara Park, where the volunteers got to hang out and chat with the children, quickly becoming important role models for this next generation.

Afterwards, we headed back to the camp, where we played games with environmental messages, such as, pin the fin back on the shark, endangered species memory cards, a recycling game and we even took some scuba equipment with us so the kids could try breathing from a tank.

The day ended with a presentation of certificates and also we gave the children reusable water bottles as a prize.

This was an invaluable experience for the volunteers, who had an amazing time and saw first hand the importance of the work they do here.

We celebrated our 'new home' with a BBQ on the beach, watching one of the most spectacular sunsets I have ever seen.

Since then, we have set up a volleyball net, I have taught sunset yoga on the beach and Vishal has organised a beach cinema night. We are all so very happy to have such a beautiful location from which to work and relax after a hard day out in the field.

We have also gone 'super green' setting up a compost system, introducing a recycling station and system for the whole resort, rebuilding our tree sapling nursery, getting bicycles for the volunteers to use...everyday we think of new ways to reduce our carbon footprint.

The volunteers had many adventures this month and they did a lot of island hopping on their weekends, visiting Koh Lanta, Koh Jum, Koh Phi Phi and Railay.

It has been a very busy month and now we have settled in to our new premises the team and I are very excited about moving forward with our amazing projects.

The conditions were tough this month due to the rain, but once again, the volunteers have demonstrated an incredible commitment to making a difference in this world.

Keep it up everyone, because everything you do counts!