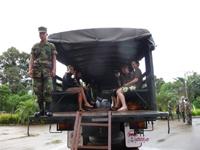 Despite having our lowest ever number of volunteers (no more than 3 and down to 0 when Elliott decided to take some time off and travel to Singapore), September was one of the busiest month for staff.

We had two big projects this month: a buoy deployment project and International Coastal Clean-Up.

The former required a lot of preparation in order to locate appropriate sites to install the buoys and prepare the buoys (the rope should not be too short or too long!). On the 10th of September, Elliott and Lek teamed up with volunteers from Kontiki Krabi, he Royal Thai Marine Police, The Hat Nopparatthara National Park and members of the Governor's Office Krabi Province to install mooring buoys around the AoNang local islands. 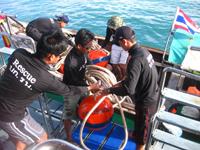 We also participated in the International Coastal Clean-Up as we have every year for the last 4 years along with hundreds of thousands of volunteers around the globe. Last year we contributed 2,000kg to the 3,402,000kg that were collected however this year our massive effort only yielded 312kg...

Despite getting 300 participants, mostly school children from 5 local schools but also 30 soldiers from the Thai Navy and many local dive masters and tourists, we did not reach our target this year as we got hit by one of the strongest tropical storms I have witnessed.

Luckily, we had other activities organised for that day such as the exhibition of artworks that the children submitted for our 'Say No to Plastic' poster competition and a raffle with many prizes kindly donated by local businesses and which allowed us to raise nearly 10,000THB for the project Aware foundation.

We also had refreshed our Projects Abroad exhibition for the event (yes, the one made out of blue PVC pipes and fishing net!). 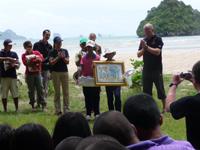 Diving this month consisted mainly in reef monitoring, marine salvage, and the buoy project. A total of 13 kilos of debris were collected during dives at Koh Doh, Si, Ha Talu and Mae Urai. The best sightings included: blacktip sharks, stingrays, octopii and a comet (fish).

Click here and see our graphs of the amount of rubbish the volunteers have collected from the reefs and beaches here in Ao Nang since 2006.