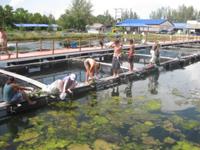 The month of August was action packed, with between 6 and 13 volunteers getting down and dirty in the local mangroves, lending helping hands at the Krabi Fisheries Department, bird watching at the beautiful Emerald Pool, helping clean up neighbouring beaches and diving locally and around Koh Phi Phi. Volunteers also undertook activities such as marine salvage, coral and fish surveying, and a buoy monitoring project.

This month, the weather was against us and we were not able to go diving as much as we would have wanted to. To keep the volunteers busy, we took them to a Thai cooking class which proved to be a lot of fun and we discovered unsuspected skills amongst our team! 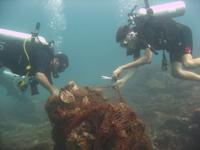 Another day, we made salvage bags out of an old (but still in good condition) fishing net which we had picked up from our mangroves site a couple of months ago. 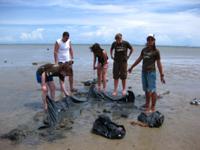 Volunteers collected a huge 108kg of litter, largely fishing nets, the breakdown by dive sites is as follows: 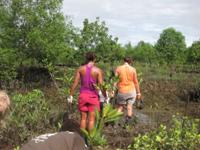 Despite limited visibility on many days, thanks to the lovely August weather - think choppy waves and tropical storms - volunteers sighted some unusual marine life during their dives, most notably an amazing Clown triggerfish at Losama Bay and several serene Hawksbill turtles at Viking Cave in late August. Other exciting sightings included:

Thanks to donations from Saint Mildred's Lightbourne school in Canada, Krabi Resort and Phuket Aquarium, we are going to place 20 mooring buoys at strategic locations around the local islands. 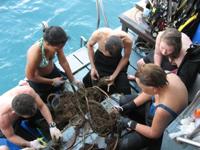 Mooring buoys are essential to prevent damage to coral reefs from anchoring which can result in:

- Increased sediment in suspension if the anchor is dropped in the sand.

In August, we have been looking for the right locations to place the anchors; convenient for the boats and with an adequate substrate to fix the buoy onto. We also prepared the buoys with Kon Tiki staff, which consisted of tying reliable knots and shackles and painting the names of our sponsors on the buoys.

Next month, we will install the 20 buoys with Kon Tiki staff as well as members from the Marine Police and the Had Nopparat National Park. 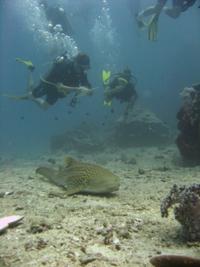 Volunteers were put to work twice at our mangroves nursery in Thung Prasan. On the first excursion volunteers had quite a morning workout, clearing the land under the hot Thai morning sun. Once the weeding was done, we then planted some 50 mangrove saplings. During the second mangroves trip volunteers measured a patch of mangrove saplings, some of which had and had not been pruned, collecting some useful comparative data. We also reinforced the main bridge which enables access to the plantation site.

At AoNang beach, we were joined by the Community volunteers and staff as we were celebrating the Queen's Birthday. It is common in Thailand to do something special for the environment on the Queen or the King's birthdays. So we decided to clean AoNang Beach and tried to persuade as many by-passers or sunbathers as we could to join us.

This month, volunteers visited the Krabi Fisheries Department in Laem Poh, where they learnt about the work of the facility and assisted by removing algae from the ponds.

Volunteers also went bird watching this month, at a nature reserve not far from the picturesque Emerald Pool. The reserve officers first gave a presentation about the site and the local avifauna. They then guided the volunteers on the site and gave them advise as to how to best spot the birds. Some of the birds sighted included: Chestnut-winged Babblers; Red-eyed Bulbuls; Green Broadbills; Asian Fairy Bluebirds; and Tiger Shrikes.