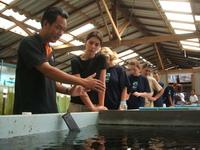 March has been a busy month here in Ao Nang, with volunteers learning about fish breeding during a bio-workshop at Krabi Fisheries Department, releasing anemonefish and damselfish on various local reefs, measuring the corals in the nursery at Viking Cave, designing an environmental-awareness poster, cleaning a couple of beaches, transplanting mangrove saplings and collecting over 1,500 mangrove seeds. 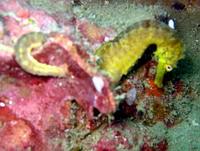 The bio-workshop consisted of an interesting trip to the fisheries department at Ao Nam Mao, where the lead scientist gave a tour of the facilities, including an explanation of their natural water cleaning and filtration process, and presented their methods of breeding various fish species. This was followed by a practical activity of cleaning out one of the aquariums they use for breeding, which the volunteers thoroughly enjoyed as it was obvious that their help was much appreciated by the fisheries department. The following day we returned to collect three hundred False clown anemonefish (Amphiprion ocellaris), which were then released into vacant anemones at Anemone Reef and Shark Point. Five hundred more False clown anemonefish were released at Koh Ha later in the month, as well as one hundred and fifty Bengal sergeants (Abudefduf bengalensis) and one hundred Similar damselfish (Pomacentrus similis) at both Mushroom Rock and Maya Wall on Phi Phi Lei. 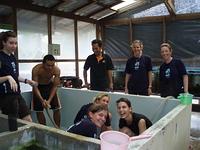 We also returned to Viking Cave for two dives to fulfill our commitment to Phuket Marine Biology Centre (PMBC) and continue the work of measuring the corals growing in their coral nursery there. This task arose from January's bio-workshop, where scientists from PMBC presented their work in this area of reef rehabilitation. They asked us to return every 2 months to clean the trays and measure the branching corals for them, as it is a labour-intensive job that they find hard to complete on their own. Cleaning the trays consists of brushing away the algae with wire brushes and toothbrushes, as well as scraping off the barnacles and other encrusting organisms growing on the underneath of the trays. It is important to do this regularly because the algae can hinder the coral's growth and the weight of the barnacles may be too heavy for the floats, causing them to sink.

On the reef monitoring side of things, three ReefWatch surveys were carried out at Koh Yung, Ao Nui, and Koh Talu, and three more permanent transects were laid at Koh Ya Wa Sam, Koh Talu, and Shark Point. The latter was a particular achievement as the previous attempt in February had to be aborted due to strong currents. We also visited Wong Long Bay and Bida Nok where we removed nine more Crown of Thorns starfish (COTS) from each site, as well as 6 COTS which were collected from Shark Point at the same time as the transect laying. 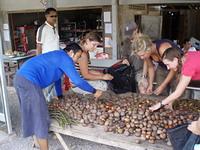 We have had our most productive month this year in terms of reef clean-ups, with 87.4kg being removed from six different reefs. In the items collected from some reefs, it is probable that much comes from tourists as they include dive masks, snorkels and sunglasses which are easily dropped from the boat, and plates, bowls and cutlery which often get blown overboard on windy days. This was evident at reefs such as Maya Nui, Ao Nui and Mushroom Rock. However, the other big contributor to marine debris is the fishing nets and traps that we always find each month. We were alerted to a large fish net caught on the corals around Koh Ha at the beginning of the month. We were told that it had trapped many fish including a couple of sharks, so we arranged a specific salvage mission there as soon as we could to remove it. However, due to pre-arranged plans for the immediate day after hearing about it, we could only go there two days later, and when we went down we discovered that someone else had apparently removed it before us, as it was nowhere to be found. Although this was a bit of an anti-climax as we were all psyched up for a major salvage operation, it was very encouraging to realise that it is not just the volunteers from Projects Abroad that are helping to protect the reefs around Krabi. We have still not found out who removed it but it was most probably divemasters or instructors from another dive school in Ao Nang. 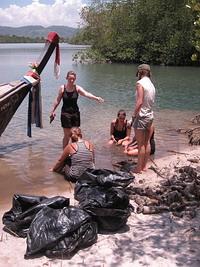 In addition to the hauls described above, we ended the month by making another trip back to Mu Sang Nua, our adopted reef for International Year of the Reef (IYOR) 2008. We had two dives there focusing on removing the fish nets caught in the shallow water around the rock pinnacles. Over both dives the volunteers managed to remove 56kg of fish net, which is a fantastic effort especially as the wave surge at shallow depths makes it much harder to control buoyancy and demands constant awareness of the hard corals, stinging sea anemones and sharp spines of sea urchins. Despite removing a lot of the nets, we could not retrieve all of them so we returned the next day to continue, but as that was the first day of April I'll leave that for next month's report. On the first dive there, I swam around the reef again taking photos of as many animals as possible for our diversity study of the reef. If we do this each time we go there, we will hopefully be able to build up a large record of the majority of the marine organisms at this beautiful reef. During this dive I found another species of seahorse in addition to the one I discovered in February, a Tigertail seahorse (Hippocampus comes) which is classed as vulnerable on IUCN's Red List of threatened global species. Morn and his divers also saw a Leopard shark (Stegostoma fasciatum), which is always exciting to see, though not such an uncommon sighting on the local reefs. Morn has always been particularly adept at spotting seahorses, which he proved on a dive at Koh Talu where he found three different species: the Common seahorse (Hippocampus taeniopterus); the Estuary seahorse (Hippocampus kuda); and another Tigertail seahorse (Hippocampus comes). 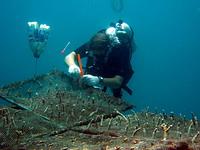 As I mentioned in February's update, we planned to develop an awareness-raising poster about the reefs, trying to educate tourists here in Ao Nang on the best ways to protect the reefs. So, we had one day in the office, where we brainstormed ideas for the content and design, and then split into smaller groups to work on different sections. It took longer than we all expected but we were all really pleased with the final product, which I will now take to the printers to make A3 posters to put up in hotels in town. We also altered it to fit A4 portrait format so it can be published in the Krabi magazine next month, and if the editor likes it then hopefully every edition from now on. There are further ideas to develop information leaflets, and possibly have the A4 poster laminated and given to tour operators who can then hand them out for their customers to read on the way to the reefs, before diving and snorkeling. 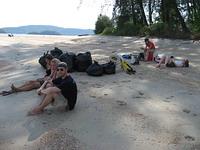 On to the land based field activities, in which the volunteers have cleaned two beaches and the mangroves upstream from Nopharat Thara longtail harbour, as well as continuing with the transplantation of the mangrove saplings in our research nursery and collecting over 1,500 mangrove seeds for cultivation over the coming months. The monthly land salvage total in March was 450.1kg which brings the accumulated total of the first quarter of 2008 to 2078kg, as can be seen in the charts in the link at the bottom of this update. This is over 300kg more than the total this time last year, which is not a particularly positive record as it means there is possibly more rubbish collecting on the beaches. This could be for various reasons, but the way Ao Nang is rapidly growing in size and population I am not surprised by this observation as more people leads to more debris incorrectly disposed of. One of the aims of IYOR 2008 is to increase awareness of the problems marine debris causes, so we will continue organising workshops in schools educating the local children. Plans are already well in progress for two such events, one in April during the school holidays, collaborating with the Projects Abroad teaching and care volunteers who are running a holiday camp for seventy children from two schools. We plan to have the conservation camp on the 21st - 23rd as this coincides with Earth Day on the 22nd April, another worldwide environmental awareness-raising campaign along the same lines as IYOR. The second school workshop in the pipeline will hopefully be around June-July time, and I am sure we will have another in September to tie in with the International Coastal Cleanup as we have done for the two previous years here. 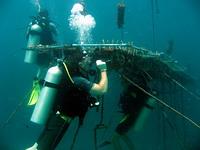 In the middle of the month we returned to our mangrove research nursery to transplant the Bruguiera sexangula saplings that we planted on 16th April 2007. We transplanted these in the same conditions as the Ceriops tagal saplings which we transplanted in January; planting half with all the soil and roots fully intact, and the other half with the soil shaken off and the capillary roots trimmed. We aim to return sometime towards the end of April to measure both species to see if there is any immediate difference in survival or growth rates between the two methods. On another day during March we helped the local community by collecting seeds that they will then either plant straight into the ground to reforest an area or use to build up another nursery for later planting of saplings. It is quite a task climbing amongst the complex root systems of the adult mangroves looking for the seeds, but a different and enjoyable one all the same. 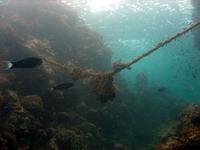 As is obvious, March has seen plenty of activity both above ground and under water. As we come into April, the hottest month of the year, we have the school conservation camp to plan and look forward to. The preliminary plans are to run a workshop in the school with the kids on the first day, followed on the second day with a trip to the mangrove walkway where they can experience the biodiversity of the mangrove ecosystem, and a beach clean on the third day. We will also explain and offer them the opportunity to take part in an annual international art competition, organised and sponsored by the Mangrove Action Project, in which the winning pictures relating to the environment will be made into a 2009 calendar. 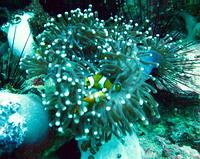 Click here and see our graphs of the amount of rubbish the volunteers have collected from the reefs and beaches here in Ao Nang in March 2008 - impressive work.

Click here and see the poster volunteers and conservation staff have designed and put it up in hotels around town in March 2008.