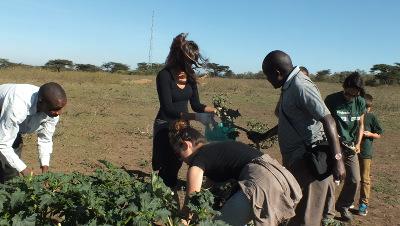 “With its iconic appearances and historic popular appeal, the giraffe is the world’s tallest living terrestrial animal and the largest ruminant. Recent years have seen much needed new research undertaken to improve our understanding of this unique animal.”
Anne Innis Dagg in her new 2014 book on Giraffe: Biology, Behaviour and Conservation

With the onset of short rains the vegetation turns lush green and the colours of the savannah gradually move from faded green to green. This is definitely good for the environment but it also triggers the growth of invasive species that are dominant in the soil waiting for the right moment (presence of moisture) to sprout rapidly, flower, fruit and disperse seeds. Invasive species are increasingly a global concern, with invasions altering ecosystem functioning, threatening native biodiversity, and negatively impacting agriculture, forestry and human health and to save the situation the invasive species were plugged off manually. 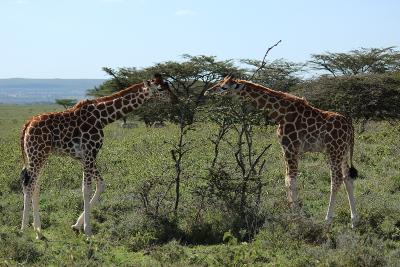 On 28th October 2014, one of our adult female giraffe Lola gave birth to Suavek (named by one of our volunteers), a very healthy calf. Suavek is brother to Lino, after giving birth to Lino we were able to accurately predict when Lola will give birth again. How is that possible? Giraffes have an average gestation period of 446- 447 days and Rothschild’s Giraffes (Giraffa camelopardalis rothschildi) in captivity - up to 470 days.

Lola is the first generation of giraffe to be born in our conservation project (approximately born in 2007), and since the start of the project Lola has given birth to Lino on 2/04/2013. This new birth brought the total number of giraffes to 30 for this sub-species which is classified by the International Union for Conservation of Nature (IUCN) as endangered and of high conservation importance on their IUCN Red List. The future of the giraffe is very uncertain, especially for the two subspecies that are in the endangered category.

This is why understanding the ecology of this species is so crucial, and we are proud to be part of the team that is working tirelessly to counteract the decline. This is being done by conducting monitoring and research on the ecology of this sub species, in order to understand its requirements in the wild, along with countering the factors causing their decline. Kigio Wildlife Conservancy, who is our partner, is home to 5% of the Rothschild’s giraffe species. The data on activity pattern of the giraffe will be published soon. 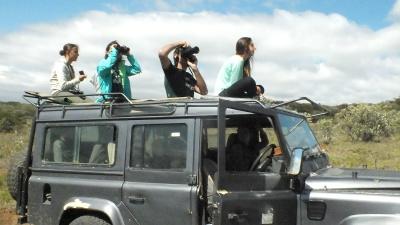 Our project has yielded very crucial information about the reproductive behaviour of the giraffes; they give birth in a specific area of the conservancy. This area has now been nicknamed ‘maternity’ due to the fact that all females give birth in that area, but the reasons for this is yet to be understood!!

The Kenya Wildlife Service (KWS) conducted a total count of all the animals in the conservancy on the 17th and 18th October. Our volunteers helped greatly during the exercise! The study covered the Kigio conservancy and the neighbouring ranches. The results for census are as follows: we found that 38% of all sightings were Warthogs (Phacochoerus africanus), 30% were Impala (Aepyceros melampus), 10% African Buffalo (Syncerus caffer), and Rothschild’s Giraffe (Giraffa camelopardalis rothschildi), Zebra (Zebra) and Eland (Taurotragus oryx) each made up 8% of sightings. 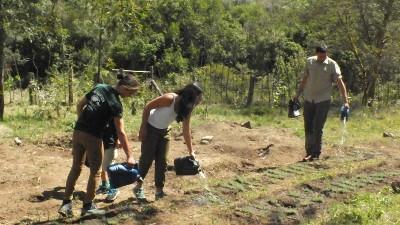 The camera traps have been very instrumental in our mammal inventory project. Our motion sensor cameras are operating around the clock in the conservancy and are triggered every time they sense animal movement. These cameras capture images of wildlife species in the conservancy and this data is crucial in understanding species present in the conservancy, the behaviour as well as information on the activity pattern is also extracted in the long run. We are looking into using this non-invasive technique to monitor behaviour of the endangered Rothschild’s giraffe.

Our volunteers were able to plant many seedlings and the nursery has lots of trees which are ready to be for planted next year in the communities and neighbouring schools.