Here you will find detailed information about the different areas in which you can get involved on this Conservation & Environment project in Peru. These are projects that operate continually throughout the year, but there are many other smaller projects that often run on a one off basis or seasonally.

Projects Abroad was officially awarded a 476 hectare reserve at the end of 2004 (Reserva Ecologicà Taricaya) and now we have to produce a technical report every year to justify our work in the area. The data from these studies is necessary for these reports to demonstrate that the area is recovering from previous disturbances and that our work is having a positive impact on the ecosystem in the reserve. The information is collected in fixed point observations such as a 42m canopy platform, data walks, mist netting and pitfall traps to name but a few. The reserve is well on its way to representing the rainforest as it must have been before human invasion and the data has enabled us to publish many papers.

Our team of staff at Taricaya includes specialists in many fields. Therefore, it is no surprise that to date we have registered 50 species of amphibian, 63 species of reptile, 115 species of mammals (including 53 species of bat), over 300 species of butterflies, 286 species of plant and 445 species of bird. These figures are remarkable for an area of 476 hectares and the biodiversity of the reserve has already marked Taricaya as a hotspot for wildlife. Our findings will undoubtedly figure in future field guides to the flora and fauna of Peru. During your stay with us you will participate in many of these studies and learn from experts in the field.

The concept of releasing captive animals into a safe environment is a popular concept for conservationists worldwide. Taricaya was the first official centre of its kind in Peru. Laws did not exist for such centres in Peru and we pioneered the concept amidst an ongoing battle for rights to sanction the release of confiscated animals. Now we host many enclosures that allow animals to recover their health before releasing them back into their natural habitat. Thus far we have released 24 species of mammal, 13 species of bird and 4 species of reptile back into the wild.

With qualified staff and associated vets constantly monitoring the progress of our residents the future looks very bright for all our animals and those yet to come into our care. With 39 animals in the centre currently we continue to pioneer work in this field. We have plans for captive breeding programs and the reintroduction of groups of certain species that have been hunted to extinction locally.

The animal rescue centre occupies a lot of our time and you will come into contact with some truly amazing animals. You will help feed them, care for them and get involved with the maintenance that such a huge project entails. 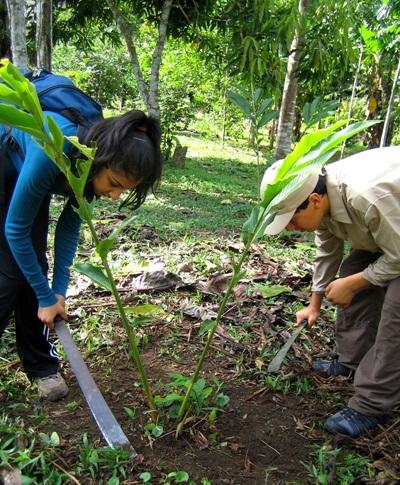 At Taricaya we are sympathetic to the daily problems that local farmers face. Puerto Maldonado was a boom town as little as twenty years ago but the people that flocked to the Madre de Dios river are not farmers by tradition. They are primarily gold miners, rubber barons and Brazil nut collectors. As a result they suffer trying to make the meagre plots of land awarded to them by the government rentable. The riches of the area soon dried up leaving the fortune-seekers high and dry without local knowledge and sufficient means to make them capable farmers.

The concept of the pilot farm is to help the locals manage their land efficiently and hence reduce their impact on the surrounding forest. Hunting, fishing, timber extraction, charcoal burning and palm leaf collection are time-consuming and labour intensive activities which they would gladly rescind given the opportunity. We, at Taricaya, are fortunate enough to be able to perform various experiments with crops and productivity that local farmers do not have the luxury of testing. We are now in a position at Taricaya where we have created a self-sufficient module for local families. 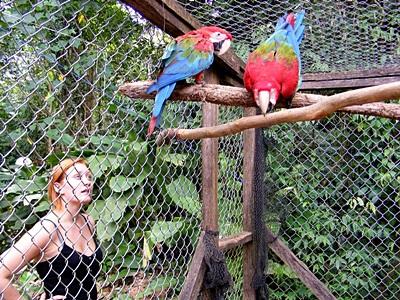 However, there is a problem. Various international charities have tried to work in the area before with concepts designed to revolutionise the lifestyles of the local communities. Having brought the locals around to their way of thinking the money has always dried up and the participants have been left high and dry. This has resulted, and justifiably so, in general mistrust of people trying to help. We are now in a position to help the locals without the need for an initial financial investment by the communities concerned. When people come to us for aid we know that they are receptive to our ideas and the passive approach we have adopted over recent years is finally proving productive. Our combination of livestock management, tropical flower cultivation for sale and crop cycling is finally reaching the surrounding communities. Many communities benefit from an improved standard of living whilst having less and less of an impact on the forest around them.

As the pilot farm passes into its second phase we can perform more direct investigation into plantation management and recuperation of abandoned grasslands. 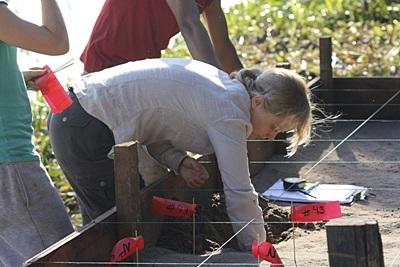 The side-necked turtle (Podocnemsis unifilis) has suffered for decades due to the commercial value of its eggs. Locals can raise large amounts of money, relatively speaking, from the sale of their eggs in the markets of Peru. In Puerto Maldonado the problem is particularly severe and the local communities have relied on this income for several generations.

At Taricaya we have liaised with the government authorities concerned and have permits for the annual monitoring of a huge island in the middle of the Madre de Dios River. We collect the eggs during the laying season (July-August) and transfer them to artificial beaches at Taricaya. Here we await the occlusion of the eggs in November/December. Then we engrave the young turtles with a code on their shells. This means that future recapture will associate the individual turtles with our project at Taricaya. To date we have released over 6,000 baby turtles back into the river system and in 2010 we photographed a young adult with a mark on its shell from our 2005 releases. 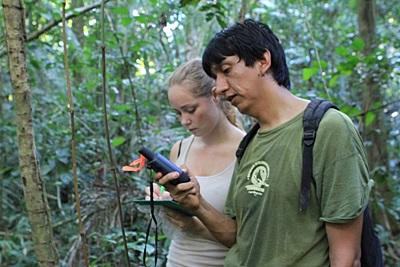 Due to the hard work of over 1300 volunteers that have visited us since 2001 we have a trail network of over 50 kilometres which has been GPS mapped. Our research has benefitted greatly from this extensive series of trails with exact points of reference. The patrolling of our reserve is crucial also to the resident fauna. Given that poachers have been known to enter illegally to hunt, a constant monitoring of the area has become a necessary chore.

Tropical storms are violent by nature and tree-falls are common. This means constant monitoring of our trails becomes an unavoidable task to allow access to all corners of the protected area. We are happy to report that incidents of illegal entry have greatly reduced over the last few years but we cannot rest on our laurels and trail maintenance is an essential part of our work in the reserve.

This new initiative at Taricaya is in its infancy but the long term goal of the project is to research the reproduction of several different species of butterfly. We will also investigate their potential commercialisation as a viable source of income for local rainforest inhabitants. This would reduce their impact on the forest and improve their standard of living at the same time. This idea of scientific research coupled with financial gains for local communities makes this project very exciting.