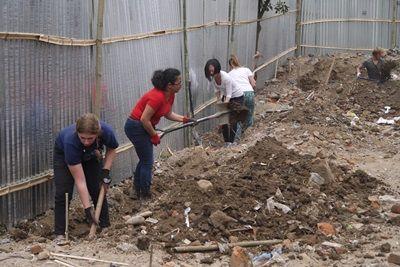 A group of 15 Disaster Relief volunteers have just broken ground on a new school building in Patan, in the Kathmandu Valley. The new construction, on the grounds of the Yashaswi Gurukul English Secondary School, is the sixth school building to be completed since Projects Abroad began their Disaster Relief efforts in Nepal last June.

On April 25th 2015, an 8.1 magnitude earthquake struck Nepal, killing over 8,000 people, and injuring tens of thousands. Many school buildings in the Kathmandu Valley were destroyed and even more were damaged beyond repair, including several Teaching and Care placements that Projects Abroad has worked with for over ten years.

Disaster Relief projects began shortly after the initial emergency response was completed and in the months since the earthquake hundreds of Projects Abroad volunteers have arrived in Nepal to work on rebuilding schools. Working with a foundation of poured concrete, volunteers have constructed brick classrooms across the valley, and completed five buildings at primary and secondary schools.

At Yashawsi Gurukul, the school is being built to fill a need across the wider community. As the school’s director, Homnath Adhikari, explains, “Our school was not levelled during the earthquake, but damaged beyond repair. The building has been marked as condemned, and no longer safe to house students. Though we currently have students in lean-to structures, our numbers have climbed post-earthquake, as we have taken many students from surrounding areas whose schools were completely destroyed. We are grateful for the volunteers, whose hard work will allow us to hold lessons for our growing classes in a safe structure.”

The completed building will also serve another purpose. As aftershocks continue, even nine months later, and the fear of another large-scale quake remains, the school building will be able to serve as a safe gathering space for the local community, in case of further disaster. 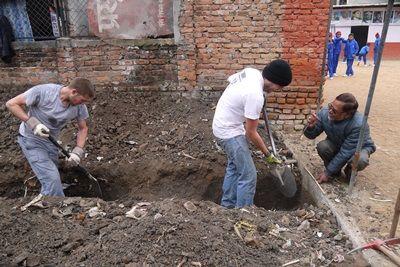 Several volunteers working at Yashawsi Gurukul also worked on the previous site, bringing their construction skills with them to the new project. Nevertheless, each plot provides different challenges. As Disaster Relief Coordinator Lindsay Burns elaborates, “The building at Yashawsi Gurukul is the largest of the constructions we have done in Nepal. The rectangular plot will have eight classrooms – a large undertaking – but our volunteers have proven committed to putting in the energy and hard work.”

The first week’s labor is comprised of what Lindsay calls “earth-work,” or digging trenches for the building’s foundations. Working alongside local engineers, volunteers are involved in every aspect of the construction process, and receive specialized training, from excavation to bricklaying.

Both Lindsay and Homnath are hopeful that the current project is on track to finish within three months, in accordance with the previous construction sites. As with children all across Nepal, these students’ schooling has been disrupted by last year’s earthquakes. Projects Abroad has made a commitment, not only through Disaster Relief but also through Teaching and Care Projects, to restore stability to the education of many Kathmandu children and teenagers. In collaboration with Nepalese experts and volunteers, brick by brick, we are working to get local communities in Kathmandu back on their feet.