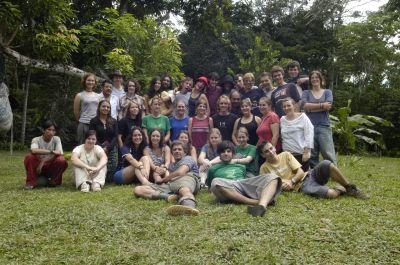 To celebrate, they planned to release Machete, a Southern Tamandua (Tamandua Tetradactyla), into the safety of the reserve. As its name suggests, this particular creature arrived on their doorstep around three months ago with several wounds that had been inflicted by a machete.

A tamandua is a medium-sized anteater that lazily moves around the trees of the forest looking for termite and ant nests. With fused snouts and specialized tongues, they are unable to inflict a bite of any sort and, whilst they have strong claws for climbing, they are no danger to anything other than the ants and termites that they feast on.

The needless violence towards this young adult was shocking and the horrific nature of his injuries made our team even more determined to save him. They rushed him straight away to a nearby vet as our facilities in Taricaya could not deal with the extent of his injuries. Every cut had to be cleaned and stitched, and a strong course of antibiotics was started. Even then, his recovery looked very unlikely, and staff and volunteers took turns providing constant attention.

After almost three weeks, he was finally able to stand and move around independently. A purée of milk, termites and minced beef aided his amazing recovery a month later and now, a few weeks on, he is ready to be released.

The Taricaya Rescue Center has gone from strength to strength over the past six years and it  has been officially appointed the first Animal Release Center in this part of South America. We are pioneering this concept and have already released many animals back into their natural habitats.

So far, 26 species of mammal, 13 species of bird and 4 species of reptile have been released into safe environments. Mainly birds and small mammals, such as monkeys, have been at the receiving end of this project but the center can also account for the release of a jaguar, a puma and two tapirs.

It seems apt that this fond farewell to Machete is timed so succinctly with a much welcomed new arrival. Thus continues the circle of life thanks to everyone’s continual hard work and dedication at the rescue center.

Read more about Conservation in Peru