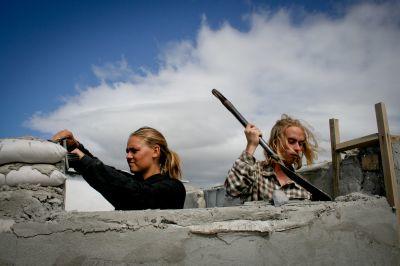 The Projects Abroad Building project in South Africa is part of Village Heights’ Friends and Neighbors, a World Design Capital 2014 project. The Friends and Neighbors project has been awarded a Gold Star rating in the City of Cape Town’s Mayor’s Portfolio of Urban Sustainability, which showcases some of the best practice achieved in the development of areas in Cape Town.

A World Design Capital project, Friends and Neighbors, is an initiative of the False Bay Ecological Park Steering Committee that strives to build meaningful relationships with neighboring communities by implementing processes that ensure integration of the conserved area into local landscapes for the benefit of those living near the park and the improved conservation of the False Bay Ecological Park.

The activities proposed in Village Heights as part of the Friends and Neighbors project is called ‘The Other Side of the Fence’, and it seeks to connect the communities which live on both sides of the reserve. To fulfill the objectives set out, the project gets the assistance from a team which includes Projects Abroad. The project has strengthened the relationship between the community and the nature reserve, invasive vegetation has been cleared, and a vegetable garden has been planted for the community.

The Building project has played a vital role in helping the residents of Village Heights.