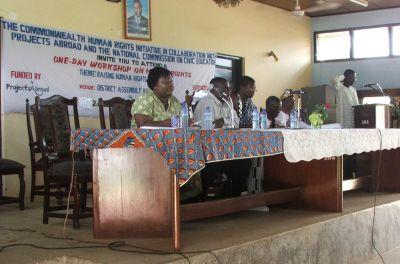 The Campaign Against Child Trafficking organized by Projects Abroad Human Rights volunteers in Ghana has been gaining momentum in recent weeks.

Two Projects Abroad PRO social workers have been working in Kete Krachi with the children of a rescue shelter called ‘Village for Life.’ The children are receiving counseling and academic support from our volunteers who have also been training the staff of the shelter on issues such as child development, behavior and attachment. They have been training women's groups, teachers and hospital staff in the area and recently begun counseling students in the local high school.

Danish journalist, Jeppe Hedegaard has maintained a weekly column in one of Ghana's most prominent national newspapers; the Ghanaian Times. Each article focused on a different aspect of trafficking. In a recent piece she commented on the ‘Village of Hope’ rescue shelter that: ‘Under the name of Village of Life this small village houses around 30 children who he has rescued from the lake, and in the daytime the shelter offers schooling to both the trafficked children and other children from the surrounding community. The idea is that it will be better for the former trafficked children to be among other children in order for them to better reintegrate.’

Meanwhile, in the capital, Accra, the human rights volunteers have been preparing for a photo campaign in support of the Campaign against Child Trafficking. This will be launched over the next two weeks. There is a long way to go but progress is being made.