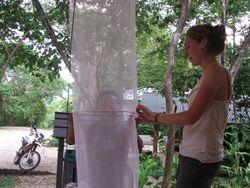 Although June hasn't been the busiest time for us in terms of volunteers, we have still been incredibly busy continuing the work that has already been started, finishing certain projects around the park and setting up our butterfly project.

We began the month with the construction of the butterfly traps, those of you who have never seen a butterfly trap will be able to see the basic design in these photos, bait is left on the bottom plate (Which can be fruit, meat or even faecal matter depending on the type of butterfly you want to attract – we have been using fruit)

The butterflies are attracted to the scent of the bait and land on the plate to feed, once they walk to the centre where the bait is they feed until they are full or scared 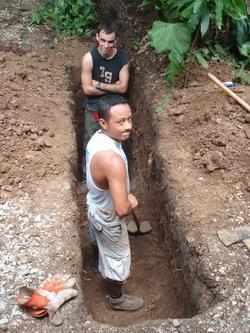 and then they fly, generally they cannot fly great distances downward so they get caught on the side of the net and then proceed upwards where they stay.

Once they are caught we can then come along and retrieve them from the net, bring them back to the camp and sort through them, identifying them and saving the most impressive individuals of each species to be displayed here in the park.

Although the displaying process is probably the part that many people will consider to be morally wrong it is part of the project that must be done, we cannot take the photos needed to identify species unless they are mounted and dried effectively, clearly once this process has been completed we should keep the specimens to make a presentation for park visitors and scientists who visit the area.

There have been a few studies already in the area but nothing continuous or regular enough to be of real use, so once again we are starting something ground-breaking for the park, learning along the way and already gaining some impressive results for the area.

Some of the other bigger projects we have been doing this month included the some things from the vast list of maintenance projects in the park, this time we began, 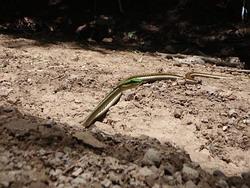 and finished, the construction of a new drainage ditch for the kitchen sinks, this is something that should be done for every drain, toilet and shower, but like many things in the park there wasn't enough time or money to do them in the beginning. It doesn't sound like a huge project but legally drainage ditches have to be of a certain size and shape, this one being 1.5M deep on one side and 1M deep on the other and about 1M wide by 2M, not quite as easy as you originally thought right?

Thanks to the amazingly hard work of the volunteers, we managed to do this in just 1 day, although it was a very hard day we all felt content at the end of it! 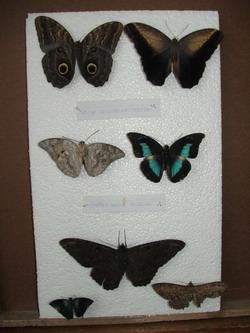 environmental education projects, on two occasions we have worked in two different schools alongside students, parents and teachers to clean the school and plant native species from our nursery garden into the school grounds.

The reason why this has been especially enjoyable was because the students and teachers and parents noticed us as foreigners and began asking questions as to why we were there helping out, after explaining how people from all over the world are interested in working in Costa Rica for free to help conserve the beauty that this country has to offer we were all impressed to see that many of them were shocked and then almost embarrassed that there were people doing work that they could easily be doing themselves. Many of the children especially were then asking questions about other things they could be doing to protect the park and the surrounding areas and of course everyone noticed that the National Park Barra Honda was also heavily involved in these projects, improving the parks image which will eventually help us in controlling illegal activities and get extra help and funding into the park.

The increase in wildlife movement has shown no sign of decreasing this month although we have begun to notice a strange pattern in the area. As we are running three different observation projects in the area have been able 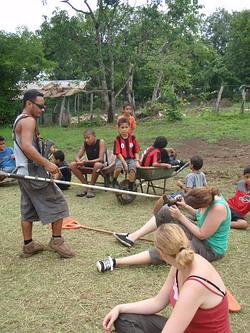 to note the difference in movement on three different levels, Firstly we have noticed that there has been a increase in reptile movement and numbers around most of the park, over the last month we have seen 4 different species and about 8 individuals which has been a massive increase on months passed.

However we have noticed that there has been a decrease in mammal movement, this decrease has been noticed through the use of the sensor cameras and although we are 100% confident that the mammals are still in the park and nothing bad has happened to them we have yet been able to identify where they are now. It is very probable that, like in many countries that experience such different seasons, the wildlife is now spreading out due to the higher availability of food in the park, but water is still only available in certain areas and as yet we have not been able to find the water holes that mammals are using…The hunt continues!

And finally we have also noted that at this time there is a constant increase of species and individuals in the butterfly world, this is clearly because of the increase in fruit, flowers and salts from rain and faecal matter in the forest, which is continuing to keep us very interested in the butterfly project as new species are arriving all of the time.