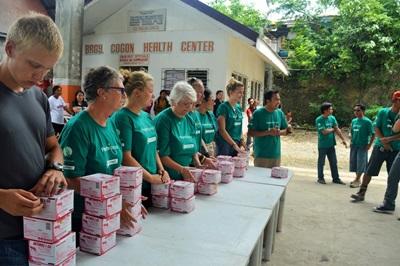 Dengue, a mosquito-borne tropical disease, is a widespread problem in the Philippines, affecting both children and adults.

Dengue hemorrhagic fever, caused by the dengue virus, is spread through the bites of infected mosquitoes and can be fatal. In recent years, there have been various efforts by the local government and various NGOs in the Philippines to combat the spread of dengue. A report from the World Health Organization (WHO) states that by October 2015, over 100,000 cases were confirmed nationwide, including 317 deaths. This is a 31.9% increase from the same period in 2014.

On October 16th, Projects Abroad volunteers from different projects across the Philippines came together to conduct a massive larviciding campaign in partnership with the Rotary Club of Cebu and the City of Bogo. Close to 1,200 people from Bogo’s 29 barangays attended.

Mrs Maita Manglapus of the Rotary Club of Cebu gave a presentation on the importance of dengue prevention. She explained that larvicide, a type of pesticide that inhibits the developmental stages of the insect by targeting them at their larval stage, can be efficient in combatting the spread of the virus. If the larva can be exterminated before they fully develop, there will be far fewer dengue mosquitoes around, and less opportunity for the virus to spread. 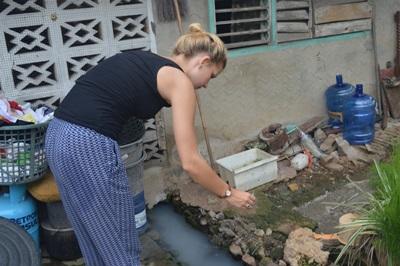 Even though there are ongoing efforts to reduce the prevalence of dengue mosquitoes, more needs to be done to involve local communities in the process. In order to assist these efforts, Projects Abroad volunteers provided larvicide to the representatives of the 29 barangays of Bogo City, for distribution in their communities. Having access to larvicide empowers families to take control of their own home environment and to be proactive in ensuring that their own health and well-being is taken care of.

After the campaign, volunteers visited host families and checked their homes for possible mosquito breeding grounds. They also demonstrated how to apply the larvicide to these areas, ensuring that no mosquito larva can develop. A total of 18 host families were visited by the volunteers.

It was a productive day for the Projects Abroad volunteers and staff and we are proud to able to contribute to the prevention of the dengue virus in the Philippines. Projects Abroad plans to continue these efforts and will run another larvicide campaign in January 2016 for the people of Bogo and its neighbuoring towns.

Read more about volunteering and interning in the Philippines.